Cousins, Vikings under pressure with another sack-master foe 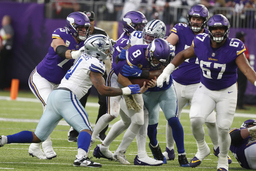 EAGAN, Minn. (AP) The trouble Kirk Cousins had in Minnesota's game with the Dallas pass rush won't just go away on its own.

The Vikings will have to put their protection scheme and play-calling through the ringer again this week to keep Cousins in rhythm - and upright - when they face New England on Thursday night.

After the Cowboys took Cousins down behind the line of scrimmage a career-most seven times, the Patriots present a similar challenge. Dallas leads the NFL in sacks (42). New England is next (36).

"It's tough, Kirk getting sacked before you even get out your break," wide receiver Justin Jefferson said. "We've just got to move toward more quick game - getting the ball out quicker, putting the ball in space and letting people work. If things are not working out the way we planned, we need to find a way to adjust and go toward something that's going to work better for us."

Asked to elaborate in an interview the day after the 40-3 loss to the Cowboys, Jefferson said he wishes the Vikings would've switched gears faster during that game.

"This is a new team. This is a new coaching staff. We have new players on this team. We're all still learning each other. We're still all learning how to play with each other," said Jefferson, who had just three catches for 33 yards on Sunday. "It's just a lesson learned."

Coach Kevin O'Connell didn't sound surprised or disappointed when the subject of Jefferson's constructive yet public criticism came up in his news conference on Tuesday, but he didn't make any attempt to validate his star player's comments, either.

"Justin knows that we're going to do whatever we can to try to move the football in the best interest of our offense," O'Connell said. He later added: "You would love to have third-and-25-type plays that you can get the ball out quickly. If you guys know any of those, just let me know."

Cousins was sacked on third-and-19 and third-and-20 in the second half. Three others came on first down, and his first two in the first half were on third-and-3.

So is it actually as simple as shortening the time from snap to pass?

"That's certainly an option. If you get it out quick, then the rush can't get there," Cousins said. "Certainly want to be in favorable down and distances, because it's hard to get the ball out quick on second-and 20, third-and-25. That's a little different. All situations kind of call for their own answer. When you can stay in favorable down and distances, you kind of give yourself, give your coaches, a larger volume of the playbook to come from."

Patriots linebacker Matt Judon leads the NFL with 13 sacks. He'll likely be facing Blake Brandel, who's on track to play left tackle with Christian Darrisaw back in the concussion protocol.

"Their operation is very clean. The personnel groupings they use provide a lot of stress, obviously, for your players," O'Connell said. "You're trying to quiet their mind, and I feel like we've got a good plan. Players are digesting it as we go, but make no mistake about it, it's going to be a heck of a challenge again for our guys up front - and really all 11."

No player in the NFL this season has attempted more passes under pressure than Cousins, according to Sportradar data, with 109. His pressure rate (26.5%) is the fifth highest among starting quarterbacks.

"We don't want Kirk to hit the ground. Us as men, we've got to look ourselves in the mirror and correct that," running back Dalvin Cook said.

© 2023 by STATS PERFORM.
Any commercial use or distribution without the express written consent of STATS PERFORM is strictly prohibited.