Buccaneers, Chiefs will play in Tampa as scheduled 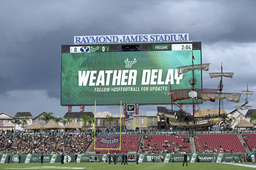 TAMPA, Fla. (AP) Sunday night's game between the Tampa Bay Buccaneers and Kansas City Chiefs will be played at Raymond James Stadium in Tampa as scheduled.

The Bucs spent most of this week in the Miami area preparing for the highly-anticipated prime-time matchup featuring quarterbacks Tom Brady and Patrick Mahomes to avoid direct contact with Hurricane Ian.

Tampa Bay practiced at the Miami Dolphins' training facility Wednesday and Thursday, when the teams announced the game will be played in its home stadium after assessing damage caused by the storm.

"Our thoughts and prayers remain with the many thousands in the Southwest Florida region who have been severely impacted by Hurricane Ian," the team said in a statement.

"We are also very thankful that the Tampa Bay area was spared the most damaging consequences of this powerful storm," the statement added. "We have informed the NFL, after consulting with local and state agencies, that we are ready to play Sunday night's game ... at Raymond James Stadium as originally scheduled."

If the Bucs and Chiefs had not been able to play in Tampa, the NFL had said the game would have been switched the Minnesota Vikings' stadium in Minneapolis.

"We would like to thank all of the local government agencies and the thousands of emergency personnel who worked tirelessly over the past few days to ensure that our area would be ready to respond if needed," the Bucs said. "We would also like to acknowledge the Miami Dolphins organization for their assistance and hospitality in allowing us to use their practice facilities."

The Glazer family, owners of the Buccaneers, are donating $1 million to assist in relief efforts to organizations that are providing support to those who have been most impacted by the storm in Southwest Florida and throughout the state.

"The destruction suffered in Southwest Florida and the damage inflicted throughout our state will be felt for some time," Buccaneers co-owner Darcie Glazer Kassewitz said in a statement. "It will take entire communities resiliently working together for an extended period and our family is committed to aiding in the recovery. Our thoughts and prayers are with the countless people affected, the heroic first responders and all of those helping to keep others safe."

Brady announced on Twitter he's donating to the Florida Disaster Fund and encouraged others to contribute.

© 2022 by STATS PERFORM.
Any commercial use or distribution without the express written consent of STATS PERFORM is strictly prohibited.